Before this, during the summer at the other side of the world, the food blogging communities had gone into the frenzy of making icy desserts which got me totally hype up and weak to my knees. After all, living in this part of the world where it is practically summer everyday, it seems so right to have my icy treats all the time. I love the local favourite is of course such as ais kacang, sai mai lou and cendol, but sometimes, some dessert are just universal, yes, that is ice cream. I believe it is one dessert that no one can say no to, besides chocolate of course.

Well, after getting bombarded with all the ice creams, gelatos, sorbets and frozen yoghurts, I nearly succumb to getting an ice cream maker. I told myself, if I found one that I can afford, I would definitely buy it. Then one day, while out with J, at a fair, I saw a tiny one on promotion and nearly bought it but in the end got against it because it cannot fit into my mini refrigerator. I was nearly devastated. Then on that week itself, J’s mum wanted to exchange some gifts from the points she collected from the credit card, and voila, J chose that ice cream maker itself for me! I was totally ecstatic.

So it came, and I excitedly tried out a few recipes. My first banana ice cream, with my own adaptations of recipes came out too hard. I wouldn’t really call it ice cream though as I made it without cream, if you’re a long time reader, I mentioned before why I usually go for alternatives. Then the next one I tried was mango ice cream (I don’t really know what type so universally I will call it ice cream even without cream), using gelatin which has better texture. Then I tried one mango frozen yoghurt, which was also not so perfect yet.

Then I came across recipes for gelatos and I got hook instantly. No cream but still rich in its way. As gelatos are uncommon here, in fact I believe I never had one before, so I must try it! I was inspired by a recipe from The Traveler’s Lunchbox, where she explained what gelato is all about and then try out three different recipes for us to gape at. I chose the recipe that she and her husband decided was best.

Now the verdict from me? It was totally utterly (pardon the pun but it was necessary) delicious! Now I would understand what the craze about gelato is all about. The texture was just right with enough richness and feel, and the taste was incredible, the ultimate chocolate fix for any sudden crave. J mention it was a little bitter, but it was because of me as I had reduced the sugar level and used really dark chocolate due to my affinity for, of course chocolate, which I overlook as a personal preference. Nevertheless, J likes it too, and I promise to come up a vanilla (his favourite flavor) gelato soon. After this gelato, I believe I would never eat another chocolate ice cream again the same way.

Although I had reduced the sugar content for my own version of chocolate heaven, I believe sticking to the original quantity below would be fine and safest for all to love. Anyhow, I believe it would be good. Oh ya, since my freezer was a quite strong, I would take the chocolate out and leave it for about 5 minutes (really impatiently) and then start digging in. Now I have to make another batch.

Coarsely chop chocolate.
In a saucepan, bring milk, evaporated milk and half the sugar to a simmer, stirrin till the sugar dissolved.
Remove pan from heat and add the cocoa powder and chocolate, whisking till all the chocolate is melted and the mixture is smooth.
Get ready a large bowl of ice and cold water.
In a bowl, beat the yolks and remaining sugar and salt with electric mixer till thick and pale.
Add hot chocolate mixture in a slow stream, whisking, and pour into saucepan.
Then cook the custard over moderately low heat, stirring constantly, until a thermometer registers 160°F (for me, I follow Melissa’s advice and go by instinct, watching not to let it boil)
Pour custard through a sieve into a metal bowl set in ice and cold water and cool.
Chill custard, covered until cold and preferably overnight.
Then freeze custard in an ice-cream maker.
Transfer to an airtight container and put in freezer to harden for several hours. 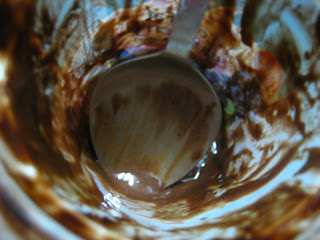 This site uses Akismet to reduce spam. Learn how your comment data is processed.

You can find me at :